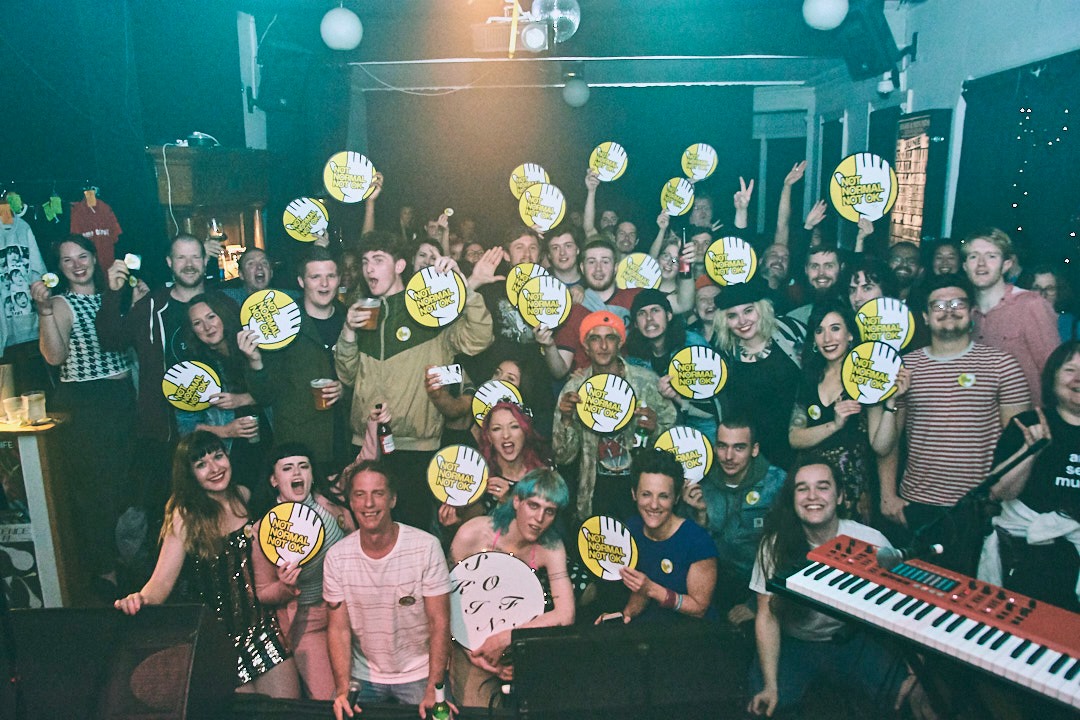 Whilst promoting the next NOT NORMAL NOT OK live gig fundraiser, being held at Centrala on 25th October, I was messaged by someone who’d just got their tickets saying: ‘thank you for making a positive difference’. Simple enough, but something in me was uncomfortable – from well planned birthday presents to professional praise I’ve been waiting too long to hear, I can feel awkward from adulation. This was different though. 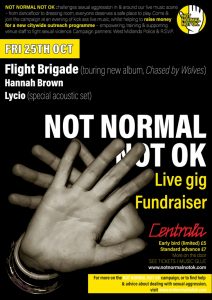 NOT NORMAL NOT OK was launched just over a year ago in response to a deluge of stories we heard about sexual violence in the local live music scene. And it started where most things do, for me, as a piece of writing. Namely an op-ed featured on Birmingham Review, which originally ended on a general call to arms to tackle sexual violence – ‘we should join together and form a campaign…’ that sort of thing.

Then we thought, why not just put a campaign together and use that drum banging energy to get people to join in – the call to arms became a social media drive, with our sticker campaign as the initial outreach activity. And it went well; venues reached out in support, promoters and artists invited us to their gigs to hand out stickers, and a reasonable chunk of both the music and mainstream media got solidly behind the campaign.

We had achieved our aim of bringing the issue out of the shadows – our logo was appearing on t-shirts, guitars, drum kits, and the occasional toilet room door at venues across the city. Our social media spiked with sign ups, the mailing list gained traction, whilst countless people asked how they could get more involved. Plus, after a relatively short time, we had already started helping victims of sexual violence get the help they needed – linking them to our campaign partners at RSVP and West Midlands Police. We had even had a few curious phone calls, such as people asking “…should I be worried?” A question that answers itself if you stop and think about it.

(On that note, we would rather see someone get help to address and change their negative behaviour than burn them at the stake. If you need help,  whatever your problems with sexual violence, be honest and reach out.) 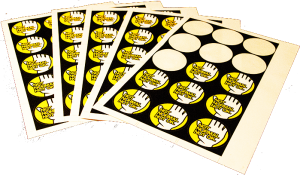 But from my days evaluating consumer based PR campaigns, NOT NORMAL NOT OK launched with aplomb. We had reached our audience; the singular idea had grown into a force of its own, propelled and shaped by the ongoing support of people across the city. And right there… that’s why ‘thank you’ makes me uncomfortable.

There are a team of amazing volunteers who have supported NOT NORMAL NOT OK from day one – pushing the message at gigs and handing out stickers wherever they go. There are the people who take the time to read and share our social media activity – which encourages new people to learn about the campaign and seek help if they need it. There are the venue managers and promoters that have been so embracing – allowing us into their premises and supporting our campaign teams. There’s everyone who’s bought a badge, worn a sticker, or turned up to our events. And there are our campaign partners at RSVP and West Midlands Police – who have made this into something more than just a paper tiger, helping us get the right support to those who have suffered abuse.

I waited for a few minutes before responding to the message I mentioned at the start of this article, offering: ‘Team effort – thanks to you too’, as my reply. I hope it didn’t sound ungrateful. It certainly wasn’t meant to. But the absolute truth is that the successes of the NOT NORMAL NOT OK campaign comes when we make that team effort, when we are greater than the sum of our parts.

I love the picture at the top of this post. It was a great gig, with everyone on stage and off sharing in a sense of real group achievement.

And we’re asking you now, as we asked when we launched this campaign, please continue to help – come to the Centrala fundraiser on 25th October, be part of the next group photo we’re planning to take. Buy a pen, buy a fridge magnet. Help us hand out more stickers at more gigs and help us reach more people via social media. Get involved.

NOT NORMAL NOT OK has made some great progress in the past year and we’re about to embark on a new outreach activity that will help us make even more – click here for more info. But this only works, really works, if we don’t do it alone. And whatever ‘thank you’s are left hanging in the air can be more deservedly shared by all of us.

NOT NORMAL NOT OK is hosting a live gig fundraiser on Friday 25th October at Centrala – with Flight Brigade, Hannah Brown and Lycio all performing live. All money raised will be used to support the venue ‘tool kit’ and staff training programme, for more info visit www.notnormalnotok.com/venue-tool-kit-staff-training-programme

Tickets are priced at £5 Early bird / £7 standard advance, then more on the door – for direct event info and links to online ticket sales, click here to visit the Facebook event page.