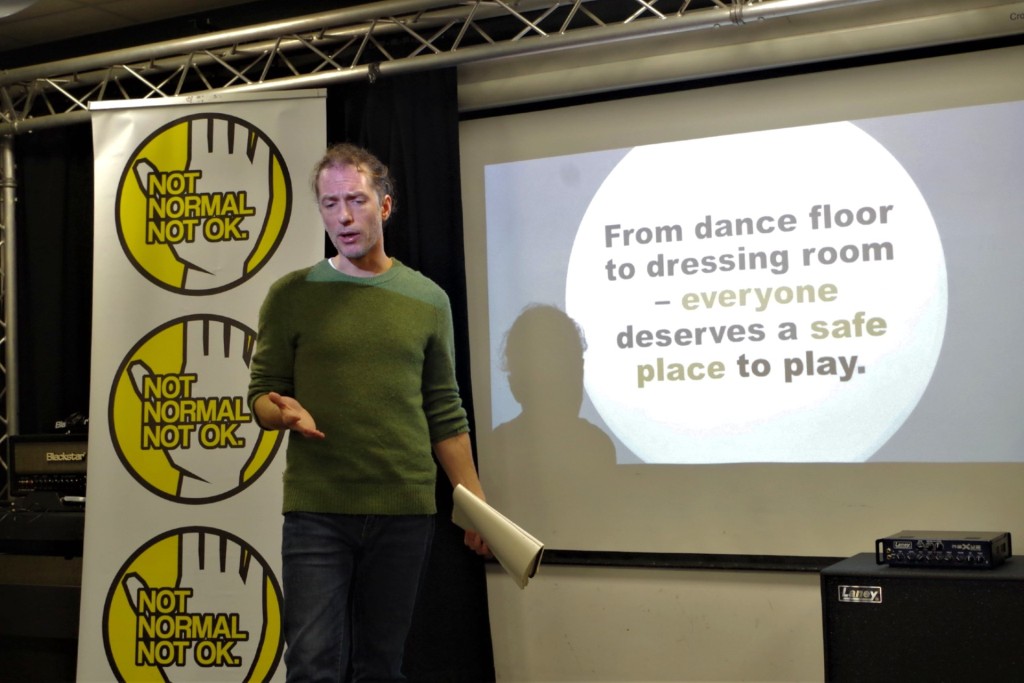 As part of their enrichment programme at the end of 2019, the Academy of Contemporary Music (ACM) in Birmingham hosted a special Safe & Sound event on Thursday 28th November – presenting a day of seminars and activities about safeguarding within the music industry.

NOT NORMAL NOT OK were invited to open the event, with the campaign director, Ed King, asked to talk to ACM’s students about the sexual violence, aggression, and manipulation they might face – with all of ACM’s students focused on a career in music, be it on stage of off, this was an opportunity for the NOT NORMAL NOT OK campaign (which champions the strapline ‘from dance floor to dressing room, everyone deserves a safe place to play’) to reach a directly relevant audience. 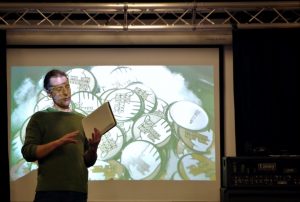 Talking about the ongoing sticker campaign, where NOT NORMAL NOT OK attend live music events and distribute campaign logo stickers to everyone playing or partying at the gig, King was keen to encourage ACM students to embrace a visible stance against sexual violence.

The NOT NORMAL NOT OK sticker campaign has been prevalent at venues across the region, creating a clearly branded environment of ‘no tolerance’ towards sexual violence at gigs, and King was eager to see the message carried by those entering the music profession.

“If we can get ACM’s students, and everyone making their first inroads into the music industry, to start confidently having the conversation about sexual violence, manipulation, and coercion, then it can have a trickle up effect as their involvement in music increases,” explains King. 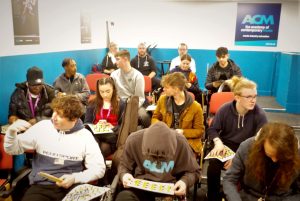 “There’s a long standing and embedded culture of sexual aggression in the music industry that we need to combat, one that has been quietly abusing people across the industry for decades.

But if new music professionals embrace the idea of no tolerance towards sexual violence, that will hopefully grow with them and help to change the industry landscape as a whole. It also sets a clear precedent, from the start, as sad as it is that we might need to reafirm one, on what is acceptable to those who might find themselves becoming aggressors.”

Christopher East, Designated Safeguarding Lead at ACM – who helped organise Safe & Sound alongside Vix Perks, the Wellbeing Mentor & Mindfulness Coach at ACM Birmingham – feels it is the institution’s ‘duty’ to offer these seminars and events: “it is our duty of care to raise awareness and equip our students as best we can,” explains East – further citing the importance of being “proactive rather than reactive when it comes to tackling the many challenges that we face in society and our personal lives.” 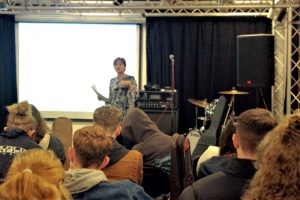 Mirroring the direct approach and attitude of the NOT NORMAL NOT OK campaign, East’s hopes were that ACM’s Safe & Sound events will encourage their students to be “assertive, empowered and vigilant,” which would, in turn, help prevent students from “falling into dangerous situations within their respective career paths.”

Also speaking at the ACM Safe & Sound event was Tanuja Patel from the Birmingham & Solihull Women’s Aid organisation – bringing the gender diverse audience into a strong discussion around safe spaces for women. Just as with King and the NOT NORMAL NOT OK campaign that preceded Patel’s presentation, it was encouraging to see such confident engagement from ACM’s student body. The day was rounded off with a Krav Maga workshop, demonstrating the combined fighting system and offering simple tips on physical self-defense. 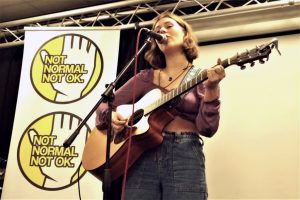 I was also invited to perform a few songs from my own portfolio, taking the stage once the dust had settled from the two seminars that began the day – giving me a chance to represent the musicians who want to support and see positive change.

As a performing artist, it seems necessary that a campaign such NOT NORMAL NOT OK would be at the ACM Safe & Sound event; it is so relevant to these young music lover’s lives, the venues and promoters targeted by the campaign are where the students at this event will be punters or where those in the room who aspire to be artists will one day be performing.

But this doesn’t stop in the classroom – in recent years, well known artists such as Frank Carter have interrupted their own gigs in order to call out sexual assault from within the crowd. This absence of shame or shyness can only be empowering to the no tolerance movement, encouraging young people, such as the students at ACM, to be more vocal as they build a career in the music industry.

To sign up and join the NOT NORMAL NOT OK campaign, visit www.notnormalnotok.com/category/join

If you have been affected by any issues surrounding sexual violence – or if you want to report an act of sexual aggression, abuse or assault – please visit www.notnormalnotok.com/category/support-advice

or more on the Academy of Contemporary Music (ACM) Birmingham, visit www.acm.ac.uk/courses/birmingham